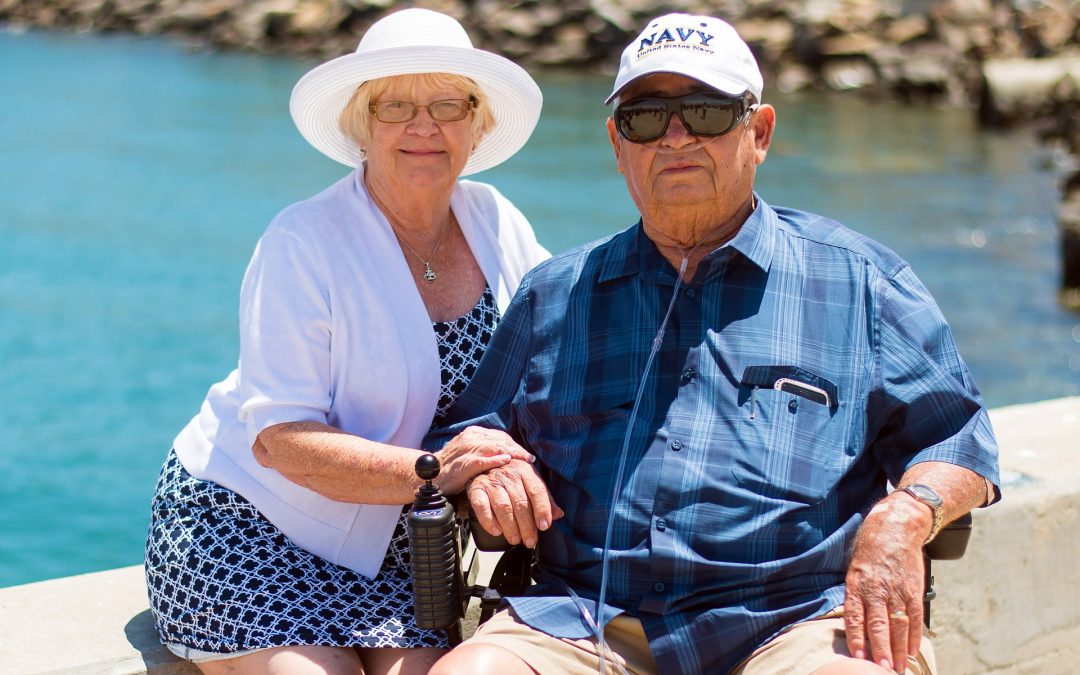 Newly developed treatment strategies can minimize the size of a patient’s stroke and, in many cases, change what would have been a life-altering cerebrovascular event into a minor one with the prospect of excellent recovery. But these therapies are time sensitive — delays in seeking care can put them out of reach. Each year in the U.S., 795,000 patients will have a stroke and approximately 70 percent of them will arrive at the hospital more than six hours after the onset of symptoms. Investigators from Brigham and Women’s Hospital examined how social networks may influence delays in arrival times for patients experiencing the symptoms of a stroke. Paradoxically, they found that patients with closer-knit social networks, including family members and spouses, were more likely to delay seeking hospital care whereas those with a more dispersed network of acquaintances were more likely to seek care faster. The team’s analysis is published in Nature Communications.

“Closed networks are like echo chambers in which there is a tendency for everyone to agree to watch and wait,” said corresponding author Amar Dhand, MD, DPhil, of the Department of Neurology at the Brigham. “A major problem in stroke care is patients’ delayed arrival to the hospital, and we show that this problem is related to the influence of patients’ social networks.”

Dhand and colleagues surveyed 175 patients within five days of suffering from a stroke. They collected information from each participant about personal social networks, creating network maps. The team focused on patients with milder symptoms because this population is at higher risk for delay and were able to engage in the survey during hospitalization. 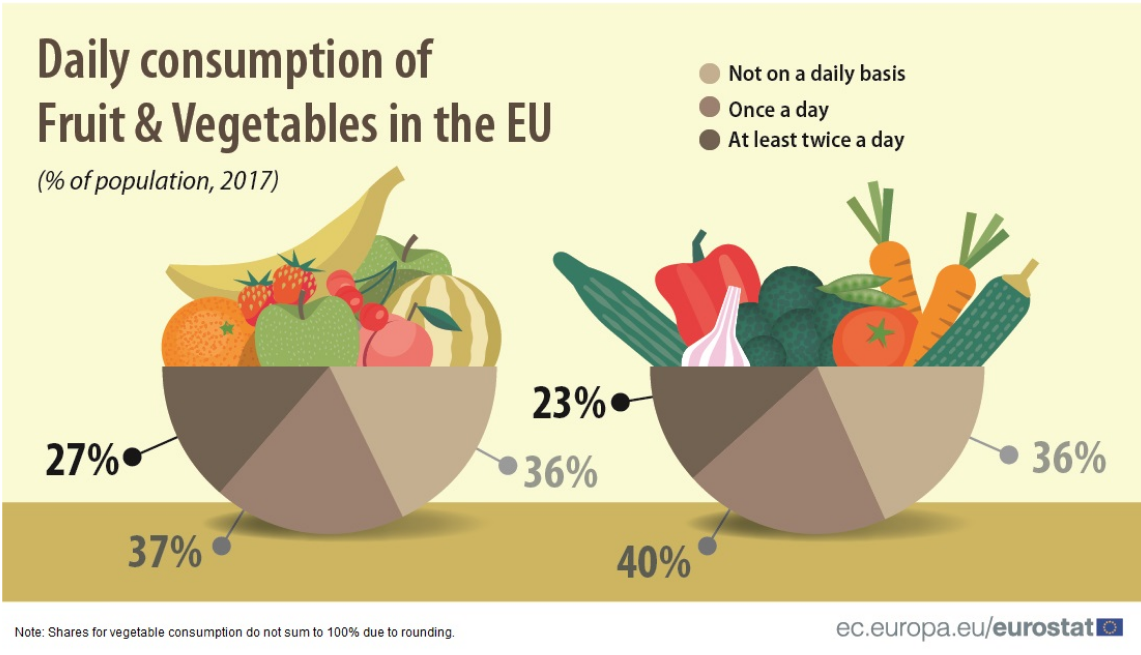 Eurostat news: Do you eat fruit and vegetables daily?

In 2017, around 1 in 4 people (27 %) ate fruit at least twice a day, according to a survey of the European Union (EU) population. A further 37 % of the EU population ate fruit once a day and the remaining 36 % ate fruit either less frequently or not at all during a typical week. Compared with fruit consumption, a slightly smaller proportion (23 %) of the EU population ate vegetables at least twice a day, and a slightly higher proportion (40 %) ate vegetables once a day. Among the EU Member States, daily intake of fruit was most prevalent in Italy (85 % of the population) and in Portugal (81 %). 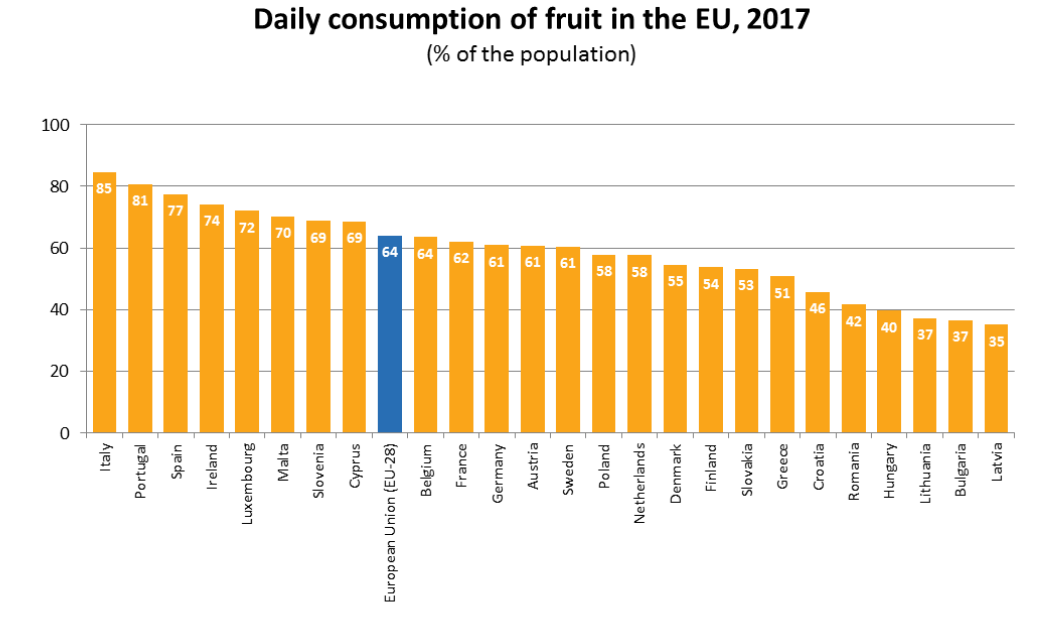 The source data are here.

For more information from this report, please click here. 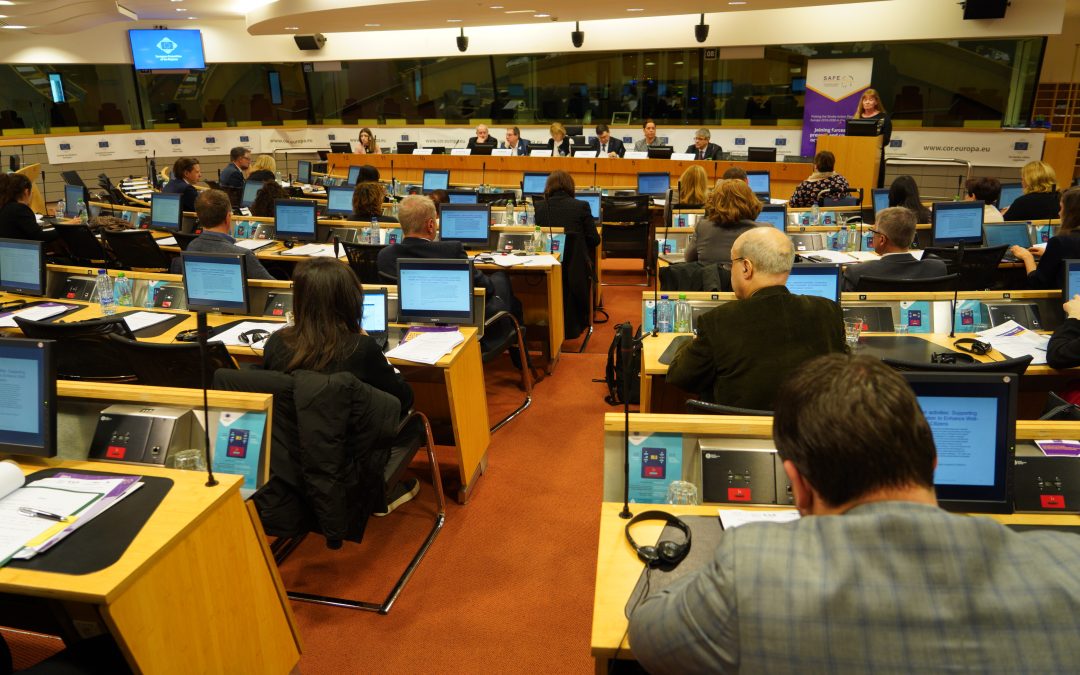 Brussels, 28 March 2019- The Stroke Alliance for Europe (SAFE) organised today the event ‘Joining forces to prevent and control non-communicable diseases: The role of policy in tackling stroke’, under the patronage of the Romanian Presidency of the Council of the European Union, in Brussels, at the European Committee of the Regions. The event was organised by SAFE in collaboration with the European Stroke Organisation and the Romanian National Stroke Association.

The panel participants have put many proposals on the table. The most important request is for forming a stroke related sub-group for the purpose of facilitating the implementation of the Stroke Action Plan for Europe, the same as has been done for cancer and mental health.

As Jon Barrick, SAFE President stressed in his opening speech, the topic discussed today is of extreme importance: Stroke is the second most common cause of death in Europe, with nearly one hundred thousand (988,000) deaths each year[1]. In Europe, over 13% of women and 9% of men die from this disease (data from the MEP Hearth Group of the European Parliament). 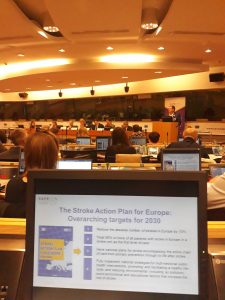 In 2018, SAFE and ESO released the “Stoke Action Plan for Europe 2018-2030”, which proposes a holistic approach to stroke management, from prevention to acute care, rehabilitation and life after stroke. The report sets out minimum targets to be reached by every European country, to equilibrate the quality of care across Europe.

“Romania is definitely trying to put an end to inequalities in stroke care across the country, and we hope to see the same thing achieved at European level” said Tiberius-Marius Brădățan, Secretary of State, Ministry of Health of Romania. “We think that this is now possible thanks to the Stroke Action Plan for Europe that SAFE and ESO have released. If implemented, the Action Plan will underpin the step change in stroke care that is required to reduce the devastating impact that this condition has on individuals, their families and Member States’ economies.”

Effective healthcare planning and adequate resource allocation across Europe is needed to deal with this public health challenge, taking into account that the emotional and financial burden of stroke is largely borne by stroke survivors themselves and their families.

“Stroke remains a major cause of disability and death, but the opportunities to curb the effects of stroke have dramatically improved”- said Prof. Bo Norrving, who chaired the European Action Plan for Stroke 2018-30 steering committee, adding “While we are discussing the implementation of the  European Stroke Action Plan, strokes continue to occur, and patients continue to get substandard care – becoming disabled or dying. Time to go from table to practice is now!”

Sorin Tuță, Vice-president of the Romanian National Stroke Association (ANRS), said that although Romania faces 61.500 new strokes each year, things have significantly improved in the past several years, especially in the domain of the acute stroke treatment, with 32 new stroke ready hospitals in 2019. 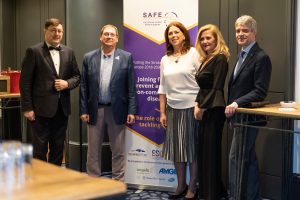 SAFE President and the representatives from the Romanian EU Presidency

“Romanian Registry for Interventional Treatment in Stroke was established in 2014 and stroke patients are treated almost exclusively by neurologists” stressed out Cristina Tiu, President Elect of the Romanian Neurology Society.

Prof. Tiina Laatikainen, from the Institute of Public Health and Clinical Nutrition, Finland, said that, even though the emergency care well organized and those hospitals not having neurologists 24/7 achieve consultancy by telestroke service, there are still challenges, such as endovascular treatments not available 24/7 in the whole country due to lack of angioradiologists, less than 15 % of patients achieve adequate rehabilitation and every fourth working aged stroke patient do not return to work (disability pension).

Thanking all discussion participants and the EU Romanian Presidency and the Committee of Regions for their support, Jon Barrick concluded the session by saying: “We have the scientific community and patients aligned. We have the will of European, national and regional decision-makers, and industry partners who are here today to give their support to future activities aimed at improving stroke prevention, treatment and research. I would therefore like to call upon the future European leaders, and upon the Member States, to work together to achieve the 2030 goals as set by the “2030 Stoke Action Plan for Europe.” 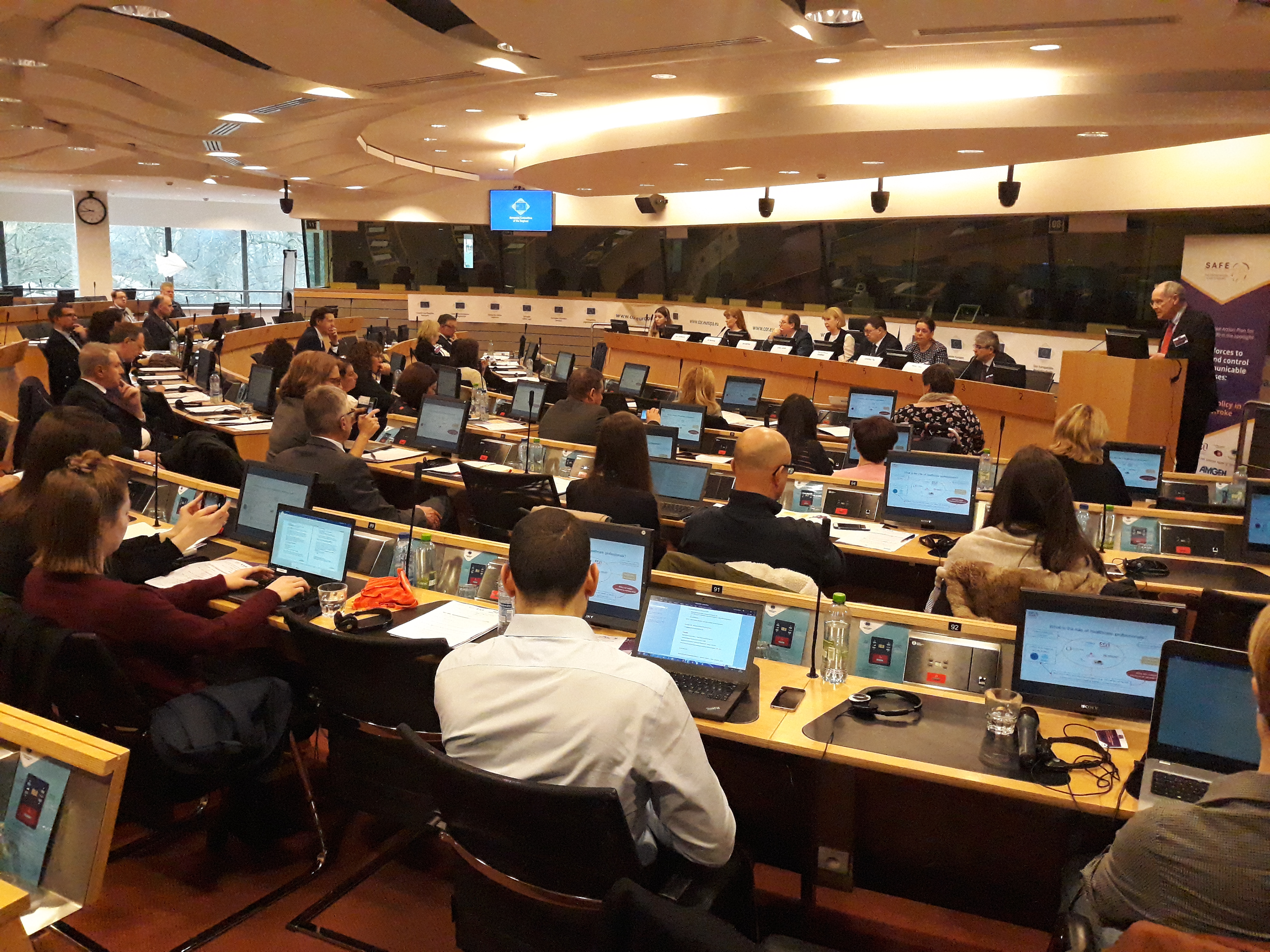 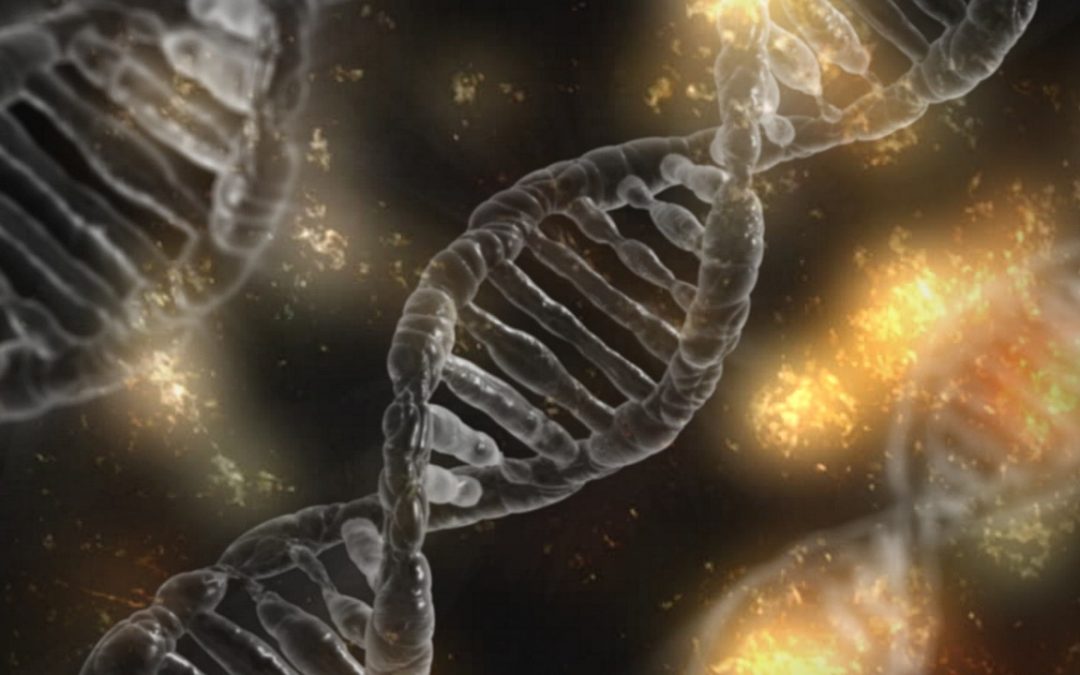 Our genes may have a bearing not only on our stroke risk, but probably also on how well we recover after stroke. For the first time, in international collaboration, scientists at the University of Gothenburg and elsewhere have identified common genetic variants that are associated with outcome after ischemic stroke.

The study, a meta-analysis of 12 international stroke studies, was led by research groups at two Swedish universities: Gothenburg and Lund. The study comprised more than 6,000 patients with ischemic stroke, the most common form of stroke, in which a blood clot causes a lack of oxygen in a region of the brain. Stroke can also be caused by a hemorrhage in the brain.

For the study, the patients were divided into two groups depending on their outcome at three months after ischemic stroke. One group was composed of people who had not survived and those who were dependent on help from others to cope with activities of daily living.

Those assigned to the second group were, three months after their stroke onset, able to cope unaided. By comparing analyses of the patients’ genomes, the researchers were able to find several different genetic variants that appear to have played a part in the patients’ outcomes.

“One of the common genetic variants we found was significant — that is, clearly associated with a worse outcome in the large volumes of data we were able to access,” says Annie Pedersen, a PhD student at Sahlgrenska Academy, University of Gothenburg, one of the lead authors of the study.

The genetic variant identified can be linked to another gene that is part of a major process involved in brain plasticity, which is the nerve cells’ ability to adapt and take over functions when other nerve cells in the brain die.

The study took into account several other factors — age, sex and the extent of the patient’s brain damage — that can also affect outcome after stroke. After adjustment for these factors, the association remained between the genetic variant and elevated risk of being in the group of patients who still, three months after the stroke onset, were unable to manage without assistance.

“Even if two patients seem to have the same prospects of recovering, their outcomes can be different. Studies on animals have indicated that there are genes that may contribute to the explanation, and we’ve now found support for them in humans as well,” Pedersen says.

Our limited knowledge of why some patients recover well while others incur lasting functional impairments after the same type of stroke has made it difficult to develop new treatment methods, thinks Professor Christina Jern of Sahlgrenska Academy, who ran the study in collaboration with Professor Arne Lindgren of Lund University.

“In the long run we hope the research may enable us to identify new targets for medication that might help to improve poststroke outcome, but there’s a lot of research to be done before we get there,” Jern says. 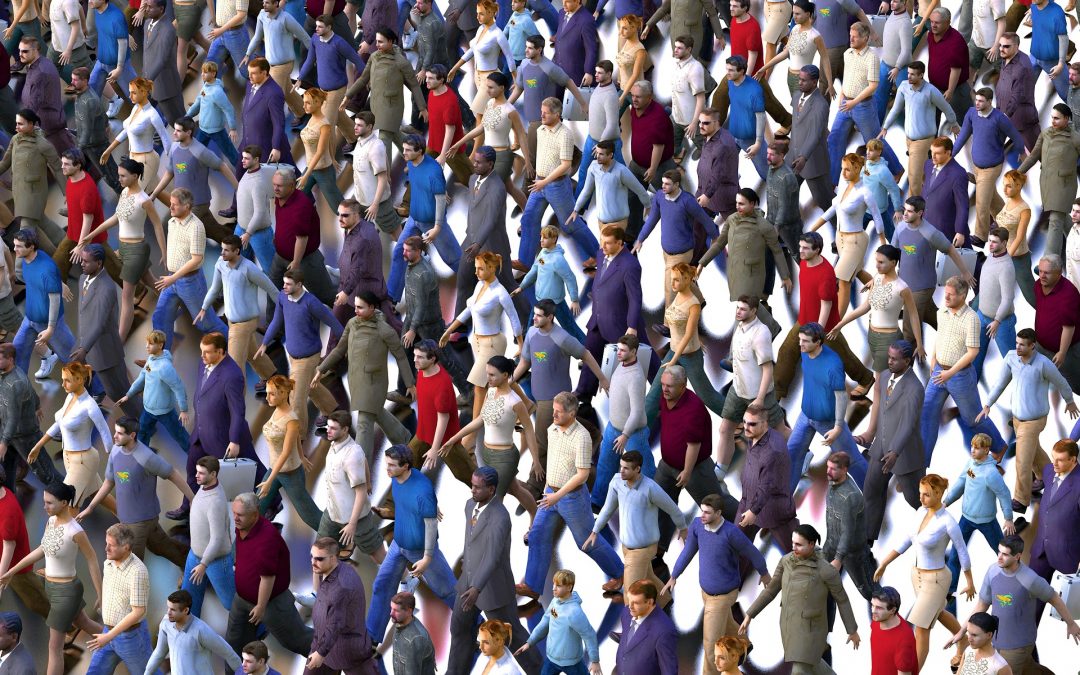