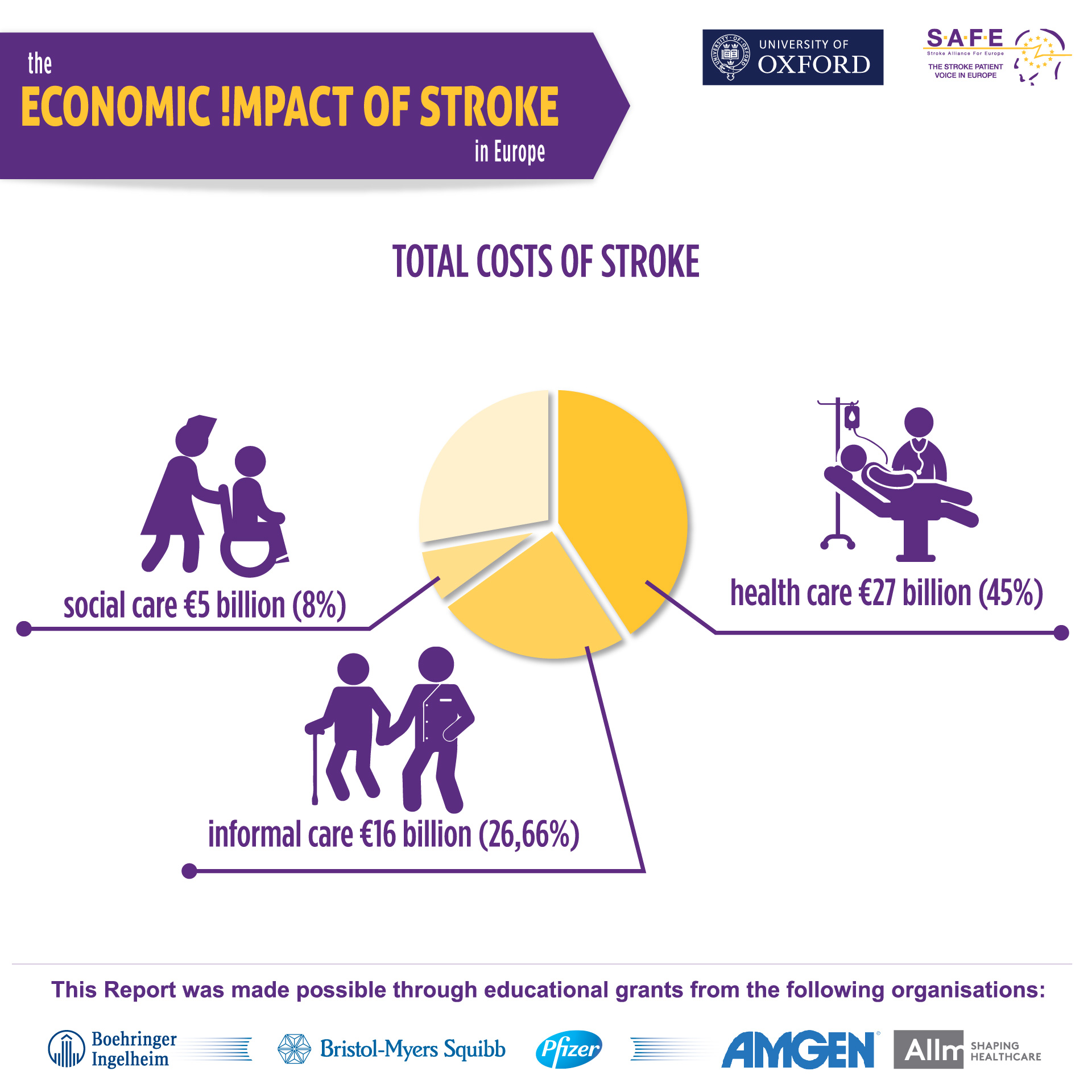 In 2017, SAFE has commissioned our next key piece of research, the Economic Impact of Stroke in Europe, which is now being finalised for publishing. The first part of this report was published as an original article “Economic burden of stroke across Europe: A population-based cost analysis” in the Online First section of the European Stroke Journal and presented to the broad public in November 2019, providing an insight into current costs around stroke in 32 European countries. The full report will be presented towards the end of 2020.

By clicking on this button below, you can access the Executive Summary of the first part of the Economic Impact of Stroke Report.

Current costs of stroke throughout Europe

The primary goal of this study by a health economics team from the University of Oxford is to increase the priority given to stroke and to reinforce and underpin the influencing of European and country-level policy work already underway as a result of the Burden of Stroke Report.

Recent modest improvements in acute care mean that more people are surviving stroke, but with impairment, with the consequence being that we have a major health economic and social burden catastrophe waiting to happen. This will severely impact all EU countries but especially those where inequalities in stroke healthcare are already known.

Stroke is responsible for 9% of all deaths each year in the EU and it is also the largest cause of adult disability. Total costs for stroke were estimated at €64 billion across Europe in 2010 and yet it is hugely under-funded in comparison to other chronic conditions. The most important risk factors for stroke are age, high blood pressure, obesity and diabetes, all of which are rising in a larger and increasingly elderly population living unhealthy lifestyles.

In line with a new focus on stroke at the WHO and in support the Commission’s ‘State of Health in the EU Roadmap’ this project will inform future EU health policy. Given the importance of a “Health in All Policies” approach, the study will also draw important recommendations on how integrated approaches to stroke prevention and care as well as improved care co-ordination between health and social services can reduce the existing social and economic burden for the benefit of stroke patients and European society as a whole.

In general terms, the economic data from the previous Burden of Stroke report will be built upon and presented in three work packages to provide more detail on:

Analysis of the total financial costs attributable to stroke in 32 European countries.
Future costs of stroke in Europe
Reducing the impact of stroke across Europe

Along these data, the Economic Impact of Stroke Report will provide:

A final report will present evidence in a lay reader-friendly and easily digestible format on the economic burden of stroke at country and family level. This will be used by the Stroke Alliance for Europe and partner organisations to help build a case for investment in different areas of the stroke care pathway and for leveraging, fundraising and campaigning work to enable action to reduce the burden of stroke across Europe, and to mobilise and inspire supporters.

Currently, the figures available to us on the cost of the stroke care pathway in the different countries of Europe are subject to missing data, often arising from an over-emphasis on the efficacy and cost of specific treatments rather than a concern with economic impact along the whole pathway.

At the European level, it is very likely that stroke research is underfunded compared to other major chronic conditions. What is less clear is just what is the spend on stroke prevention campaigns, or rehabilitation or reintegration work across Europe.
Given the expected rise in the ageing population in the next 10-20 years, and the expected increased levels of other conditions that elevate the risk of stroke, including obesity, diabetes, dementia and heart disease, we can reasonably expect the current cost burden to be significantly escalated if we do not address the issue now and invest further funds into stroke to halt, or at least slow down, the increasing human, societal and economic burden of stroke.

SAFE now wishes to raise the profile of the issues detailed above and develop a robust case ideally, or at least to advance the evidence and discussion, that will allow us to bring this issue to the forefront across a wider audience, including government and policy makers. To do this, we need to develop a clearer understanding of the current economic, societal and social costs of stroke as well as a calculation of how further investment could impact on this and help to reduce the burden of stroke.