The text is originally published first on worldstrokeorganization.blog

Over the past two decades Europe has seen a welcome reduction in the proportion of people having a stroke and for those who do experience stroke, their chances of recovering have greatly improved. The continent not only boasts some of the best stroke care in the world but has pioneered important developments in the prevention and treatment of stroke; supports an active stroke research community and has active patient advocacy organisations in almost every country. 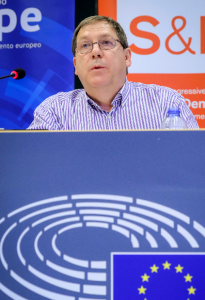 It sounds like we’ve got it sorted doesn’t it? I should really be out of a job, but in spite of all this progress we still have a long way to go before people in Europe can expect to receive the same level of care, let alone aspire to the WSO vision of ‘a life free from stroke’.

Across the continent, there is still so much to do to reduce the burden of stroke that any hopes of a quiet retirement walking my dog have been reluctantly set aside.

Despite reduced stroke prevalence figures, overall numbers of stroke are set to increase by 34% by 2035, not only devastating an additional 300,000 lives, but taking the cost to the EU economy far higher than the current estimate of €45bn a year.

As the British saying goes ‘an ounce of prevention is worth a pound of cure’ and regardless of whether you prefer your quantities in metric or imperial, research estimates that over 80% of strokes are preventable. In the context of an ageing population and concomitant increases in health and social care costs, you would expect to see political leaders and health providers doing everything within their power to reduce burden of stroke. And while the vast majority of European countries have indeed developed national guidelines for primary and secondary stroke prevention, in many countries these aren’t comprehensive or universally delivered.

While treating high blood pressure alone would almost halve the number of strokes, hypertension is significantly under-treated across Europe. Research indicates that well below half of the people who are actually being treated for high blood pressure, aren’t on enough medication to bring it to the desired target level anyway. An abnormal heart rhythm (Atrial Fibrillation or AF), which is associated with a three to five fold risk of stroke and higher stroke related mortality and disability, is also significantly undiagnosed and under-treated. For almost a quarter of stroke patients a diagnosis of AF only comes after they have had a stroke, despite diagnosis being as simple as taking a pulse. Even after stroke, when the risk is clearly known, AF is still an under-treated condition.

It’s not just in the treatment of underlying conditions that Europe shows room for improvement, from Sweden to Greece and Ireland to Estonia, public awareness of stroke risk factors would also benefit from more focused attention. Across the board, relatively few people are able to correctly identify all significant stroke risk factors and unsurprisingly underestimate their individual risk of stroke. Where is the motivation to listen to stroke prevention messages, let alone change your behaviour, if you don’t think stroke is likely to touch your life? While campaigns and public education initiatives have been implemented across the region – including many that are delivered as part of the World Stroke Campaign – more attention needs to be paid to measuring impact in relation not just to awareness but also to behaviour change.

And going beyond awareness, as my colleagues at WSO have highlighted elsewhere, we need to review some of our basic assumptions about public health interventions to tackle stroke. By implementing population-wide approaches that focus on creating healthier communities through for example, public smoking bans, taxing unhealthy foods, addressing obesogenic environments and tackling air pollution, we have the potential to deliver a double blow to stroke and to a range of diseases that share the same contributing factors.

–>
The European Union now has the evidence and the opportunity to show leadership on stroke prevention, delivering solutions that can be learned from in other developed and developing regions of the world. Their first port of call should be the recommendations in SAFE’s Burden of Stroke in Europe Report.