WAKE-UP was a European multicentre investigator-initiated randomized placebo-controlled clinical trial of MRI based thrombolysis in acute stroke patients with unknown time of symptom onset, e.g. due to recognition of stroke symptoms on awakening. 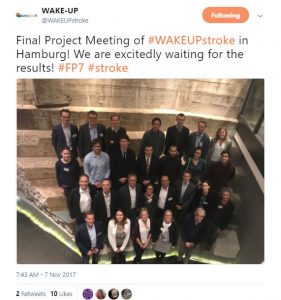 WAKE-UP aimed to improve the treatment of stroke patients. The core of WAKE-UP was an investigator-initiated randomized controlled trial of MRI based thrombolysis in patients waking up with stroke symptoms.