You are twice as likely to die from a stroke if you smoke: Do what you can to prevent it 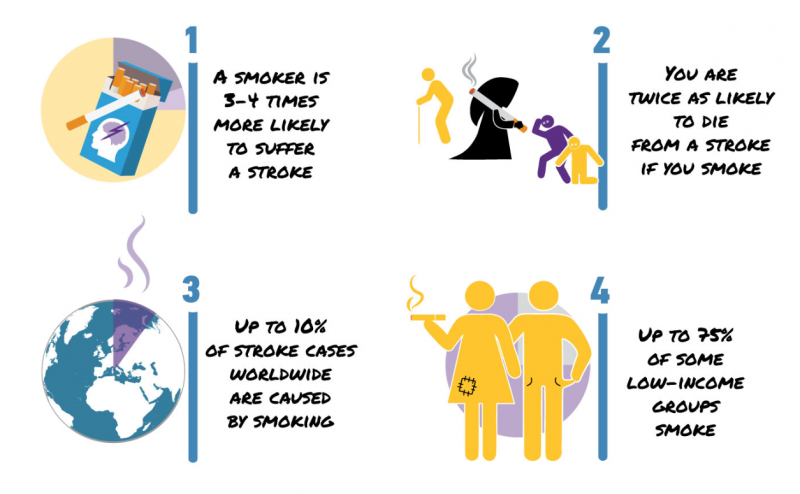 Each 31 May, the World No Tobacco Day is being celebrated around the globe by raising awareness about the harmful and deadly effects of smoking and the use of tobacco products. SAFE is trying to raise awareness about the dangers of smoking for another very important reason- Smoking is one of the modifiable stroke risk factors. Many studies suggest smoking almost doubles the risk of stroke and subarachnoid haemorrhage (SAH), a life-threatening type of stroke caused by bleeding into the space surrounding the brain (1). Long-term exposure to nicotine has many negative health effects. Some, such as a persistent cough, are noticeable. Whereas the hidden damage that happens within the brain is not often apparent until it’s too late. Research shows that the parts of a smoker’s brain that control everyday tasks, such as hand-to-eye coordination, are reduced in volume, which can impair its function (2).

According to the Statement given by EU Commissioner for Health and Food Safety, Vytenis Andriukaitis, on a global level, the figures are staggering – there are more than 7 million tobacco-associated deaths around the world each year. This is one of the main reasons why the EU and its Member States are active supporters of a global health treaty – the Framework Convention on Tobacco Control of the World Health Organisation.

“Tobacco consumption is the single largest avoidable health risk, and the most significant cause of premature death in the EU, responsible for nearly 700,000 deaths annually. This is not just a dry number. These are our family members, friends, colleagues. I am particularly concerned about young people taking up vaping and various new products like heated tobacco products and e-cigarettes, which are increasingly being marketed with misleading claims. 29% of young Europeans aged 15-24 are smoking. How many are using alternatives damaging their young lungs?” asked Mr Andriukaitis.

Up to 10% of stroke cases worldwide are caused by smoking

According to the World Health Organisation, smoking is thought to cause around 10% of cardiovascular disease worldwide. In 2008, the highest overall prevalence for smoking was estimated to be in the European Region, at nearly 29%. (3) Thankfully, in Europe, the death rate has fallen significantly over the last two years, but the number of people living with disabilities, as a result of stroke, continues to be a huge problem (4).

“The EU is working hard to protect citizens from the hazardous effects of tobacco use. One of our key milestone measures in the EU’s fight against illicit trade in tobacco products – the European systems of tobacco traceability and security features – became operational on 20 May. This means that consumers will soon see new traceability markings on the packs, together with the required security features. The traceability markings will enable national authorities to track and trace the movements of tobacco packs across the legal supply chain in the EU. In addition, security features will enable public authorities and citizens to determine if a tobacco product on the market is genuine or illicit” said Mr Andriukaitis in his official statement.

In conclusion, we all know smoking is bad for us. It’s been linked with all kinds of diseases, including stroke. But sometimes even the cold hard facts aren’t enough to make us want to kick the habit. If you’re considering cutting down or giving up, please visit SAFE’s website www.strokeprevention.info dedicated to education about stroke risk factors and check out five tips for quitting smoking.