Stroke Survivors’ needs in Germany: There is no structured, standardised care management for stroke-patients when they return home 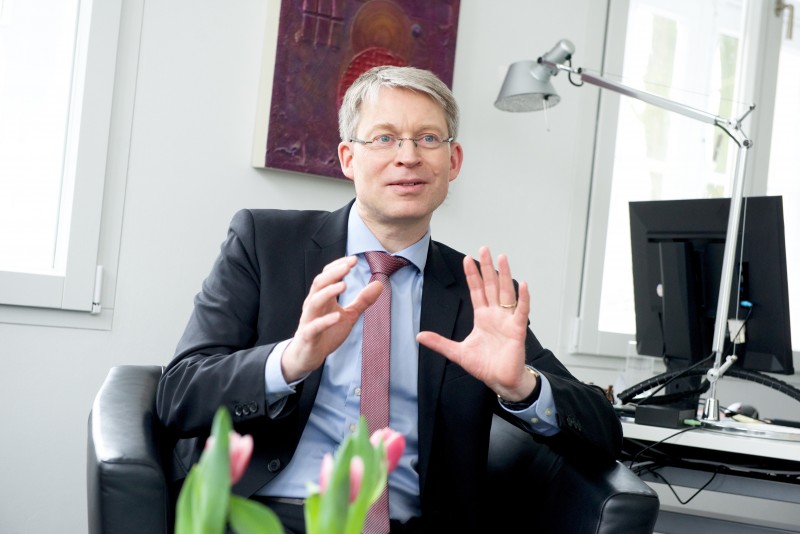 “Every year the German national “Day against Stroke” takes place on May 10th. In 2019 it will have the slogan “I can feel something you can’t see”, which is based on the German name of the child´s game “I spy with my eye…”. We want to raise public awareness to the unseen consequences of stroke like concentration and memory problems, visual impairment or states of anxiety. The foundation aims for major media coverage of the topic” says Dr Michael Brinkmeier, CEO of the German Stroke Foundation, Stiftung Deutsche Schlaganfall-Hilfe.

MB: The survival-rate of stroke-patients in Germany has been increasing over the past 25 years due to excellent treatment in more than 320 specialised stroke units. Usually the stroke-survivors stay at the hospital for a couple of days and a rehabilitation clinic for a couple of weeks before they return home. This is when the situation becomes very difficult in most cases. Common questions of stroke survivors are: How often and where do I get the necessary therapies? Where do I get financial support to adjust my home for my disability? How can I return to work and what happens if I can’t? Will I be able to drive a car again? There are hundreds of questions that stroke-survivors and their families have to deal with. Many of them are overwhelmed by all the challenges they have to deal with – and they are left alone. So far, there is no structured, standardised case- and care management for stroke-patients in Germany when they return home. We know that the quality of live decreases after stroke – not only for the patients but also for their loved ones.

But all the administrative issues are not the only challenges. Some people have difficulties to maintain a healthy lifestyle after stroke or pause there medical treatment without consulting a doctor. Many still have difficulties to return to their usual social lives, especially when they suffer from invisible or in the public not well known psychological consequences. Employers have no understanding why employees after a stroke suddenly have concentration-issues or can’t remember or process new information. Friends are confused or even offended when  leaving  a party after an hour. Neighbors find it weird when being passed on the street without saying “Hello” – simply because the lack of seeing on that side. There is still a lot of work to do to support stroke survivors  in the month and years after their stroke and increase understanding.

SAFE: What would be the solution, i.e. what is your organisation’s position regarding this issue?

MB: The goal of the “German Stroke Foundation” is very precise: We want every stroke-victim to get a stroke coordinator (a case and care manager) to support them for at least one year after stroke.

In 2017 we installed a project called “STROKE OWL” in the region of Ostwestfalen-Lippe (“OWL”). The project is financed with seven million euros by the German “Innovation Fonds”.  Specialised stroke case managers get in touch with the  patients at the stroke unit. The stroke survivor can take part in the program if he or she fulfills certain enrollment criteria. The coordinator informs patients and their families about everything they need to know, gives them advise and support. The manager organises the treatment and therapies, helps filling out applications and forms and looks after the patient in general. The foundation plans to enroll up to 2000 patients into the program. The project will be evaluated scientifically by the University of Bielefeld and all main health insurance companies of the OWL-region – covering two million people – are involved. By proving the advantages and positive effects of a case and care-management not only for the patients but also for the health care system in general the German Stroke foundation strives to support the establishment of stroke case management, which in the end is reimbursed by the insurance companies. Additionally there have been established many smaller, but similar projects all over Germany, which are connected to and supported by our foundation.

Some hospitals employ case managers, others are financed by communities or medical organisations – all with the same goal to improve the quality of life after stroke and reduce recurrent strokes.

Apart from building up a network of professional case managers the foundation has developed another complementary project: We have developed a curriculum to to educate and train volunteers becoming so called “Stroke-Helpers”. These volunteers help stroke-survivors in their everyday-life. They get groceries with them, go for a walk or play games. There are more than 300 “Stroke-Helpers” in Germany by now trained according to the standards set by us and numbers are rising.

SAFE: Please tell us more about your organisation.

MB: The “German Stroke Foundation” celebrated her 25th birthday last year. When our president Liz Mohn established the foundation in 1993, there was hardly any specific stroke treatment at all. Due to this many patients were not treated at all, and the public, but also even experts had no idea that young people and even children could suffer from stroke. These days – fortunately – belong to the past. Thanks to the effort of many committed stroke experts working together with the foundation we now have more than 320 certified stroke units in Germany and one of the best systems to treat acute stroke in the world. About 400 self-support groups are supported by us and more than 200 doctors, mainly neurologists, dedicate time as volunteers being regional representatives of the foundation. We cooperate with more than 30 so called “stroke-offices” all over Germany where stroke-survivors and their families can get information and support. The national “Day against Stroke” on May 10th has been established by the foundation in 1999. It helps raising awareness to the topic for example with media reports and many events, in which our network and other partners from industry and the public sector are included.