Stroke survivors’ needs in Portugal: Rehabilitation must be possible and accessible to everyone 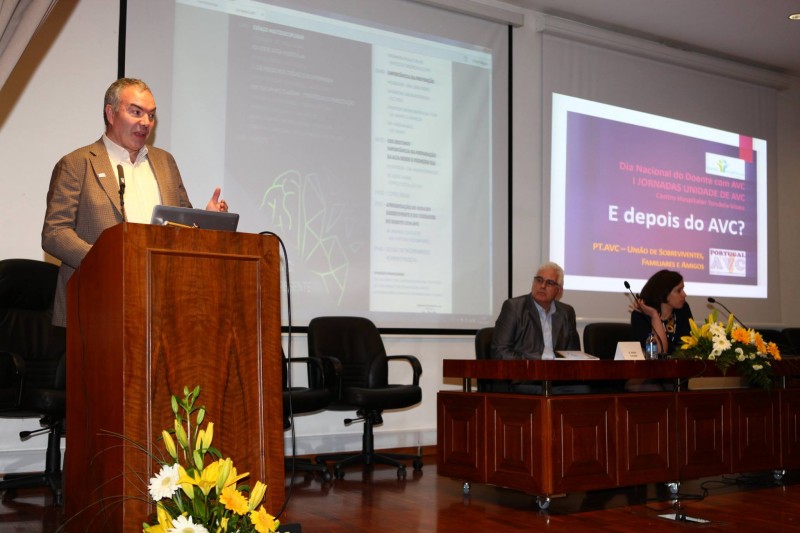 “Currently, in Portugal, when a stroke occurs, the first phase of treatment, the acute phase, happens in similar conditions to the ones of the best practices in Europe. The first rehabilitation, still within a hospital circle, is already implemented with great differences across our country, and, on average, isn’t as satisfactory. After… when the real life after stroke begins, the survivors and care givers, generally, feel alone, helpless! It’s mostly in that moment, when the biggest problems start (including the psychological, socioeconomic, life reorganization, etc. ones), that, in most cases, there are flaws. Not only in the continuity of the strictly therapeutic recovery, but also in the social and psychological support, among others…” says António Conceição, President of the Portugal AVC, a stroke support organisation that is part of SAFE.

AC: In Portugal, above all, it’s necessary to remind people, specially people with influence (not only political but other), that survivors have a life after stroke! That they can be active and useful citizens just like everyone else. And an essential contribution for that is making rehabilitation possible and accessible to everyone, as well as making it starts fast, timely and multidisciplinary (since it needs to involve multiple medical and therapeutic areas, that don’t restrict themselves to the physical or motor situation).

SAFE: What would be the solution, i.e. what is your organisation’s position regarding this issue?

AC: Our procedure, especially in our possibilities of public intervention, has been directed towards two themes: life after stroke and the defense of a better rehabilitation. Recently, we celebrated in Portugal the National Day of Stroke Survivor (31st March). All of our communication, including the one on social communication, followed this line of work: the defense of a fast, timely and multidisciplinary rehabilitation. We pointed out some very concerning flaws. The Portuguese Stroke Society (a medical and scientific organization) also followed an identical theme in its communication. Furthermore, the president of this society, a very prestigious person, said a sentence, a few years ago, that we also repeat many times: “Rehabilitation isn’t a charity, but a right! If needed, during the entire life!” We have conscience that our action has contributed to give prominence to this subject too.

Deeply connected to this theme is the defense of life after stroke, with the maximum quality possible, and the Action Plan for Stroke, by giving the proper importance to life after stroke, has helped us in this struggle. In Portugal, for initiative of the Portuguese Stroke Society, we are working on adapting this plan to our national situation. Unfortunately, we are aware that our action is only starting…

SAFE: Please tell us more about your organisation.

AC: Portugal AVC is a national association, made of stroke survivors, but also of caregivers and health professionals, founded in September 2016. Working like this, we have been functioning very well.

We have, as statuary goals, to contribute to the prevention of stroke and to respond to the needs felt by stroke survivors and their caregivers. And we defined three areas of action as priority:

– Making information available, about all “stages” of stroke, from the prevention to the life after stroke.

– To be the voice of survivors and caregivers, in the government entities and social communication.

– Mutual help. By giving answer to the multiple requests we receive, including by telephone, email, Facebook, … But also, we have promoted and supported the appearance of Support Groups (GAMs). We have already 14, in different places in the country.

Among other activities, we highlight the “Portugal AVC Meetings”. They are moments of interaction with the survivors, caregivers and health professionals, that have had a strong adherence and fantastic environment. We already organized seven, always in different locations, from the north to the south of the country.

However, we are aware that, considering the needs, we are only beginning…