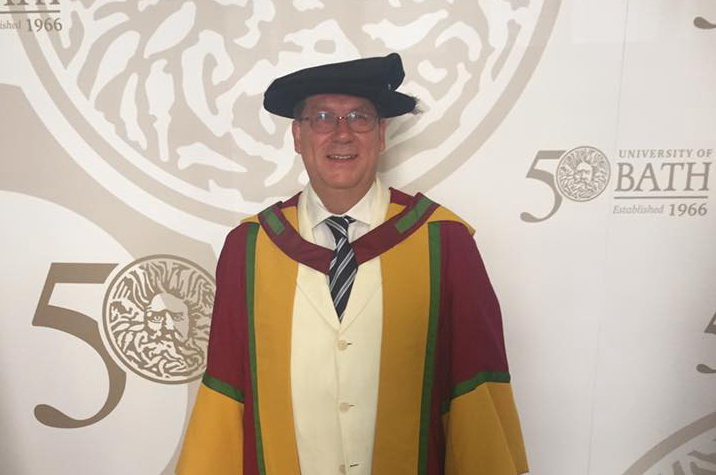 Jon Barrick, SAFE’s President since 2014, received an honorary degree of Professional Doctorate in Policy Research and Practice in University of Bath as the recognition of a long and distinguished career serving the public good in the charitable and statutory sectors.

As Professor Nick Pearce stated in his oration “Jon joined the Stroke Association in 2004 and in his time there, the charity grew threefold. It now has an income at over £37 million and 800 staff. The organisation disseminates approximately 2.5 million pieces of literature each year, manages a well-used website, and supports 82,000 stroke survivors with direct assistance in any one year. It also provides training for those who work with stroke survivors. Under Jon’s leadership, the association created the first UK “Life after Stroke” centre at Bromsgrove and established the world’s first multidisciplinary Stroke conference, the UK Stroke Forum. In 2006 it won the Best Healthcare and Medical Research Charity award. He was elected chairman of the Neurological Alliance (a coalition of nearly 50 charities). 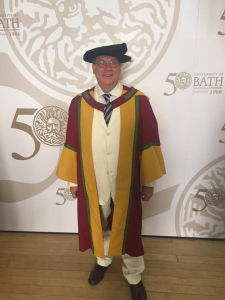 In 2014, Jon was elected President of the Stroke Alliance for Europe. He is also a member of the World Stroke Organization Board, and now chairs the World Stroke Campaign, and was a Founder Member of The Richmond Group of charities, which comprises the UK’s ten leading medical charities, formed to enable more effective advocacy to government.”

In his acceptance speech, Barrick emphasized that he was always curious to find out more about how societies’ ills could be rectified, but the University of Bath equipped him with the approaches to societal questions that could enable progress to happen.

“Without research and reflection we fall back on common perception as a guide to action, which is often flawed.
The civil society organisations I have worked in have generally thrived as a result of partnerships with other sectors -commercial, academic, civil society, governments and importantly the people affected.

In taking an issue such as conquering stroke, pooling resources across Europe and the world is going to get us there faster.” said Barrick, dedicating this award to his mother and father who both had strokes.