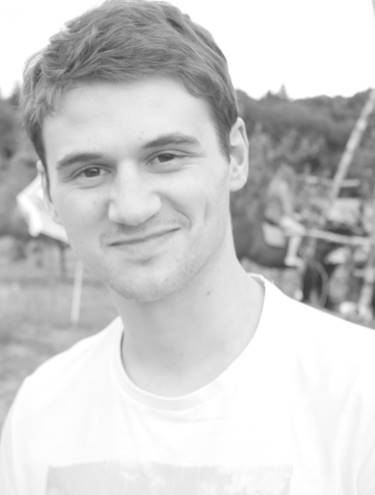 Louis Gustin is 26 years old, and when asked if he remembers what happened to him 2 years ago, he replies, “Yes, I remember perfectly.”

Louis, from the North East of France, was visiting Warsaw at the time, and after a day of strolling and hanging out, he was sitting at a cafe in the old city, chatting with two friends.

“And it was there I had my stroke. Suddenly, my eyes felt strange, mostly the right eye. It all seemed so weird. I saw green in my eye. I remember that I was looking at the two bartenders in front of me. And then, without warning, I could not speak.

They called an ambulance. The paramedic spoke to me in Polish, but I couldn’t even say, “Dzień dobry” (“Hello”). I said nothing. I had no idea what it was. A stroke, for me, that meant nothing. My grandmother had a stroke but she was 80 years old. No, I knew nothing.”

Louis’s parents flew in from France within a couple of days, along with his sister. Their son, who has a law degree, a Master’s in European law, had spent two years in Warsaw and had been accepted to study at the College of Europe, would now spend 12 days in Warsaw for his initial treatment before being repatriated to France to begin a long rehabilitation.

Louis spent 3 months in hospital in France undergoing intensive rehab, with daily outpatient sessions for more than a year after he was discharged. Two years later, the stroke still affects the right side of his body. “I can move my arm, but not my hand. I can’t lift my arm above my head. My leg is OK, my foot doesn’t move. After two years, I can walk well.  I can walk.  But all that, I had to relearn during rehab in Metz.” He continues sessions in speech therapy and physiotherapy. “When I woke up after the stroke, I couldn’t speak at all. I told myself I could get it all back in six months. No. No. Even now, I don’t speak like I did before. And then of course, [before the stroke] I spoke English well – I wrote my Master’s dissertation in English, and I spoke Polish more than a beginner. It’s difficult to remember my Polish and my English.”

Please read next:  Plans for May 2017 activities in SAFE member stroke support organisations

The most serious consequences of the stroke have been on his career. “I studied for 6 years and I cannot work. In October 2016, I started a 6-month internship in the European Parliament. This was wonderful for me. I would admit that I was stressed and not able to speak much. I had to write notes, reports and participate in meetings in French and in English. My speech – that has been truly hard.  What jobs can I apply for?  My arm doesn’t work anymore. After the stroke, I get really tired, so getting through a long work day is difficult.”

But the silver lining on this experience has been his social support network. “I was very sociable. I have all my friends in France, but also all over Europe, in Africa – it was really magnificent – friends came to visit me from all over. It has reinforced my friendships, my relationships with my family.”

While working in the European Parliament in Brussels, Louis met representatives from associations for disabled people and hopes he can find work that will allow him to empower disabled people. “Those who have had a stroke, as well as those people who are blind or paralysed. It is not necessary to be scared of disability but it necessary to act for people who have a disability.”