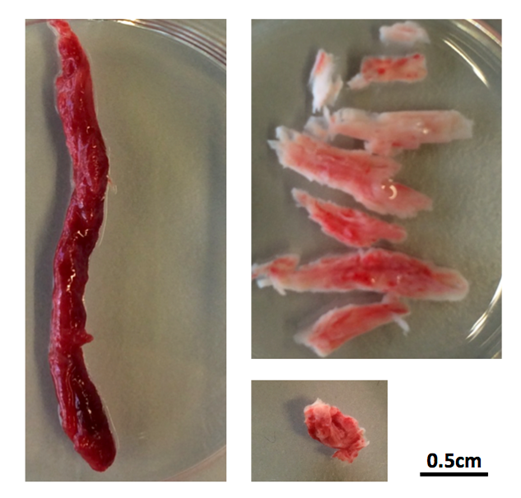 The word is Thrombus. From the Greek, thrombos, meaning “lump, piece, clot of blood.” About 90% of strokes are caused by clots blocking blood flow to the brain, and the word carries grim associations for many stroke survivors and their families. It holds a different significance, however, for Frederik Denorme. About once a week, the young PhD student at KU Leuven, Campus Kulak in Kortrijk, Belgium receives the text message, “Frederik, we have a thrombus for you.”

Denorme is 28 years old, and since 2014 has been working his dream job, analysing clots that have been retrieved from stroke patients. When the text message comes through, he makes his way to the stroke unit at his local AZ Groeninge Hospital in Kortrijk. The clot that awaits him has just been removed, and as the patient begins the process of recovery, Denorme, and his supervisor, Prof Dr Simon De Meyer, further their discoveries. 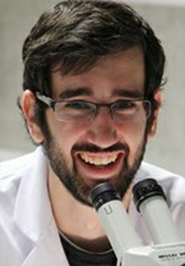 Up until just a few years ago, the best treatment option for patients was the use of medication to try to dissolve the clot causing a stroke. Then the pioneering of thrombectomy – the surgical removal of clots, still possible in only about 5 – 10% of stroke patients, allowed researchers access to some of the clots. While medical teams follow up with the patient, Denorme explains, “I have all the time in the world to investigate these clots and to possibly help the next patient, or to help prevent this stroke patient from having a stroke again.”

What’s in a clot?

No two clots are the same – some are red, and these tend to be soft to the touch, but surprisingly, some are whitish-pink and stiff. The collection at the Laboratory for Thrombosis Research in Kortrijk includes samples of clots ranging in size from half a centimetre to 7cm long! Investigations have revealed much more.

When medication called tPA (Tissue Plasminogen Activator) is given to stroke patients to try to dissolve their clot, this medication will only succeed in 3 out of 10 patients. The reason tPA fails so often is currently unknown, however it is believed that the content of the clot is a major contributor. Indeed, tPA is designed to work on fibrin – a glue-like protein in our blood and a key component in blood clots. Some of the clots Denorme was analysing, however, turned out to have low levels of fibrin. Intriguingly, some of the clots contained high levels of a blood protein called “von Willebrand factor”, which also acts like a glue in our blood, protecting us from bleeding. However, too much von Willebrand factor in the blood will lead to clotting.
So, von Willebrand factor is a blood protein that acts like a glue, and people with high levels of von Willebrand factor have a higher risk of stroke, but our blood also contains a protein which cuts through von Willebrand factor like a scissor, protecting us from dangerous clots. This protective protein is called ADAMTS13. Could another stroke treatment be developed using ADAMTS13?

With this research question, Denorme began tests on mice. He gave the mice a stroke caused by a thrombus which is rich in von Willebrand factor. When the mice were treated with tPA, the clot was not dissolved. The same type of clot, however, was successfully dissolved when the mice were treated with a drug containing ADAMTS13 – the molecular scissor. Denorme and colleagues had discovered a new thrombolytic drug.

“We actually have found a new way to dissolve blood clots – at least already we have shown this works in mice,” says Frederik. “So the next thing we do is we assess the brain damage of these mice. When we investigated the tPA-treated mice, they had a brain infarct, as you would expect from a mouse that had a stroke, but the mice treated with the ADAMTS13, in which the clot was dissolved, these mice were perfectly healthy the next day and the days afterwards.”

Investigations are continuing to establish the effect of ADAMTS13 on the bleeding rate in mice. Meanwhile, the research of Denorme and colleagues featured on the cover of “Blood”, the journal of the American Society of Hematology, in May 2016, and brought praise from other researchers for the innovative approach. “We definitely do realise that this successful story, which will hopefully continue, was only possible thanks to the input that we had from the clinicians at AZ Groeninge Hospital in Kortrijk, in particular Prof. Dr. Tommy Andersson and Dr. Olivier François.”

The research road is long, with many questions outstanding, but Denorme anticipates that access to the growing collection of thrombi will allow the team to discover important information to help stroke patients. When a stroke occurs, physicians can only make a very well-educated guess as to the cause, based on a range of tests, including imaging of the brain, heart and arteries, and blood analysis. It’s not unusual for these tests to provide inconclusive indications of what caused the stroke, or even to give no indications at all. Denorme hopes that analysing the clots will unlock more secrets, and help identify the cause of a stroke. The information provided from clot analysis could potentially also improve the thrombectomy process itself. The thrombi are located using advanced medical imaging, which provides a visual target for surgeons, who approach the thrombi with a retrieval device via an artery from the groin.

With 110 patients enrolled in the Kortrijk thrombi study, and new stroke patients being treated every week, the database grows. Some newly established collaborations will mean clots are to be sent from throughout Europe, and even further afield, with more and more shelf-space in Kortrijk dedicated to the preserved specimens. The team can collate information on the appearance of the thrombus and its content, combined with information on the patient’s risk factors.

Potentially, this data will allow connections to be made, leading to drug treatments which are more specific to the patient, and therefore more accurate and effective. “In the long term, I think we could really improve overall stroke prevention,” says Denorme. While his PhD research has focused on information available in the immediate aftermath of stroke – the acute phase, further work will follow patients in the longer term.

“The most interesting thing about this study is that we are now bridging the gap between the lab and the patient … linking the basic science, what we know in the lab, with what physicians know in the clinic.”

Denorme has been awarded a bursary from the Belgian Stroke Council to travel to the 3rd European Stroke Organisation Conference (ESOC) in Prague in May 2017, where he will present his research on a global stage. Having access to stroke clinicians from all over Europe provides a precious opportunity. “Most likely it will result in new questions that we could possibly answer, because they are focused on the patient, and we as researchers have the time, we have the know-how to look deeper into these thrombi.”

Denorme will defend his PhD thesis to become Dr Frederik Denorme on 13th March 2017, but his plan is to continue working in the lab with the clot samples provided by patient participants – stroke survivors. Denorme’s hope is to start new projects which will expand on his PhD findings, and in the long-term make further gains for protecting stroke patients and preventing stroke.