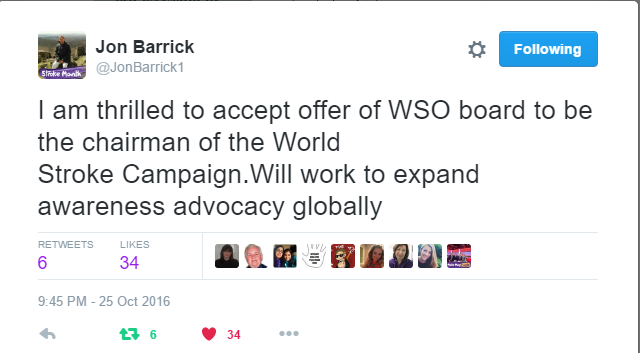 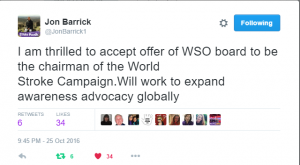 The WSD Campaign Committee and Working Group will have a lot to do in developing the new campaign theme for the 2017 World Stroke Campaign and World Stroke Day. SAFE is honoured to have our President leading the WSD17 Campaign Team.

About the WSD Working Group

Members of the Working Group are international experts and key leaders in the field of stroke. In consultation with the WSO Board of Directors, they serve as the advisory body providing technical expertise, recommendations and guidance in the execution of the campaign. They represent the various sectors in the coordinated response to stroke including academia, stroke support societies, research institutes, medical and scientific communities, and WSO individual members.

The World Stroke Organization is the result of a merger between the International Stroke Society (ISS) and the World Stroke Federation (WSF). The ISS was established in 1989 and was initially formed by individual members. The WSF was founded in June 2004 by professional and stroke support societies.

Please read next:  Family and friends are "the best medicine" for the better life quality

The boards of the ISS and WSF subsequently agreed that there was a need to have the fight against stroke represented by a single voice with broad-based representation from professional individuals as well as professional stroke support organizations. On 29 October 2006, at the World Stroke Congress in Cape Town, the ISS and the WSF were consolidated to form the World Stroke Organization.

The World Stroke Organization (WSO) is the world’s leading organization in the fight against stroke. It was established in October 2006 through the merger of the International Stroke Society and the World Stroke Federation with the recognition that stroke should be represented by a single voice with broad-based representation. The WSO has more than 1200 members from 80 different countries.