Using aspirin urgently could substantially reduce the risk of major strokes in patients who have minor ‘warning’ events, a group of European researchers has found. Writing in the Lancet, the team say that immediate self-treatment when patients experience stroke-like symptoms would considerably reduce the risk of major stroke over the next few days.

Aspirin is already given to people who have had a stroke or transient ischaemic attack (TIA — often called a ‘mini-stroke’) to prevent further strokes after they have been assessed in hospital and in the longer-term, reducing the subsequent stroke risk by about 15%. However, based on a previous study in Oxford (the EXPRESS Study) the team suspected that the benefits of more immediate treatment with aspirin could be much greater. 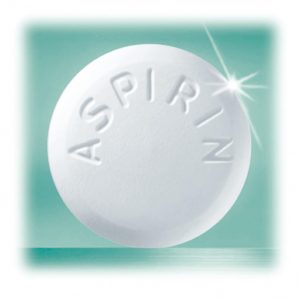 Lead researcher Professor Peter Rothwell, a stroke expert from the University of Oxford, explained: ‘The risk of a major stroke is very high immediately after a TIA or a minor stroke (about 1000 times higher than the background rate), but only for a few days. We showed previously in the ‘EXPRESS Study’ that urgent medical treatment with a ‘cocktail’ of different drugs could reduce the one-week risk of stroke from about 10% to about 2%, but we didn’t know which component of the ‘cocktail’ was most important.’

‘One of the treatments that we used was aspirin, but we know from other trials that the long-term benefit of aspirin in preventing stroke is relatively modest. We suspected that the early benefit might be much greater. If so, taking aspirin as soon as possible after ‘warning symptoms’ event could be very worthwhile.’

The team — from Oxford (UK), University Medical Center Utrecht (Netherlands), University Duisburg-Essen (Germany), and Lund University (Sweden) — therefore revisited the individual patient data from twelve trials (about 16,000 people) of aspirin for long-term secondary prevention — that is, to prevent a further stroke — and data on about 40,000 people from three trials of aspirin in treatment of acute stroke.

They found that almost all of the benefit of aspirin in reducing the risk of another stroke was in the first few weeks, and that aspirin also reduced the severity of these early strokes. Rather than the 15% overall reduction in longer-term risk reported previously in these trials, aspirin reduced the early risk of a fatal or disabling stroke by about 70-80% over the first few days and weeks.

Professor Rothwell said: ‘Our findings confirm the effectiveness of urgent treatment after TIA and minor stroke — and show that aspirin is the most important component. Immediate treatment with aspirin can substantially reduce the risk and severity of early recurrent stroke. This finding has implications for doctors, who should give aspirin immediately if a TIA or minor stroke is suspected, rather than waiting for specialist assessment and investigations.’

‘The findings also have implications for public education. Public information campaigns have worked in getting more people to seek help sooner after a major stroke, but have been less effective in people who have had minor strokes or TIAs. Many patients don’t seek medical attention at all and many delay for a few days. Half of recurrent strokes in people who have a TIA happen before they seek medical attention for the TIA. Encouraging people to take aspirin if they think they may have had a TIA or minor stroke — experiencing sudden-onset unfamiliar neurological symptoms — could help to address this situation, particularly if urgent medical help is unavailable.’

Dr Dale Webb, Director of Research and Information at the Stroke Association, said: ‘A TIA is a medical emergency and urgent neurological assessment must always be sought. We welcome this research which shows that taking aspirin after TIA can dramatically reduce the risk and severity of further stroke. The findings suggest that anyone who has stroke symptoms, which are improving while they are awaiting urgent medical attention can, if they are able, take one dose of 300 mg aspirin.

‘The research findings are also timely, as the stroke community is currently working to develop a new set of national clinical guidelines on stroke.’