We must constantly improve in our fight against stroke 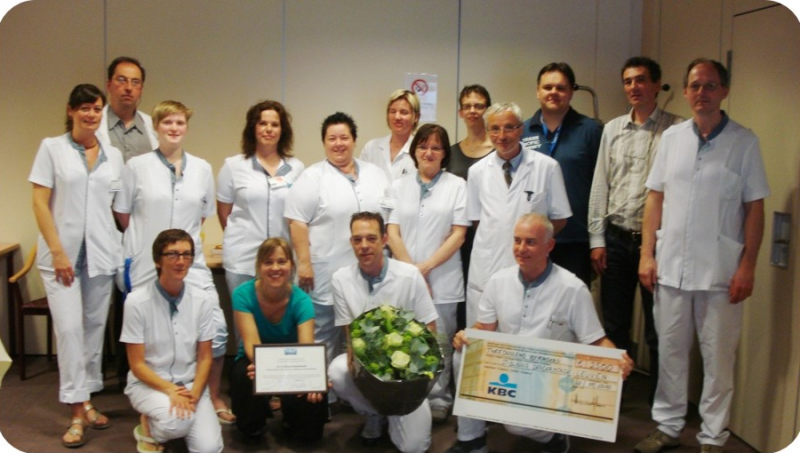 An interview with Piet Temmerman, Head Nurse at AZ Sint Blasius, shows that we must constantly improve in our fight against stroke.

Every stroke survivor knows that the care provided in a stroke unit can save lives, prevent further strokes and reduce the severity of disability caused by a stroke. It’s crucial work that demands extraordinary commitment, but it’s perhaps unusual for doctors and nurses to be active in prevention work. Nevertheless, this is the challenge taken up by a team of medical professionals, led by Head Nurse Piet Temmerman, at AZ Sint Blasius, a small hospital in Dendermonde, in Flanders, Belgium. I interviewed Piet in March 2017 to find out more.

Piet Temmerman became Head Nurse in 1994 at the age of 26, in what was then “a ward with gastroenterology and a little bit neurology”. As the local elderly population increased, neurological disorders become more common, and in 2000, the ward shifted entirely to a focus on neurology and included a stroke unit – one of the first in Belgium. Piet described his strategy at the time – “When you start something, you must have a very good team behind you – so the most important thing is to motivate them to have the same objectives.” Starting out as underdogs, in a small hospital, not attached to a university, Piet rallied his team.

Some of the team from the stroke unit at AZ Sint Blasius, Dendermonde.

From the beginning, Piet established a database, and the team maintained careful records on all their stroke patients. The data provided evidence which would underpin strategies for improvement. “We always try to improve. I always think you can do better. That’s my personality,” says Piet. First, the team set out to reduce the length of stay in hospital. Then the data showed one of the main complications experienced by the stroke patients on the ward was Urinary Tract Infections, so they worked to improve that.

Of course, improving the results for patients isn’t based entirely on using data. There is a complex web of elements that must all connect in the right way to provide the best quality stroke care. Have all of the staff been given the most up-to-date training? Are they motivated in their work? Does the staff communicate with each other and with patients? Do patients’ family members understand what’s happening to their relative? Are family members able to provide the level of care and attention the patient needs? Are the patients being monitored so problems are identified and addressed quickly? Are we missing anything? Are we listening to our patients? The list goes on, but it all boils down to the key questions – what can we improve and how?

This strategy of continuous improvement has brought significant wins for stroke patients in AZ Sint Blasius and their families. One of the most important came from the efforts of the stroke unit team to improve prevention. They started with delivering prevention evenings aimed at ambulance crews, firemen, teachers, making sure they were able to recognise the signs of a stroke, and reinforcing the importance of getting immediate medical help. Then in 2008, the team put together a stroke awareness roadshow.

“Geraakt!” included a drama performance, portraying the experiences of a young woman who has a stroke and showing how she and her family come to terms with her disability. Piet feels it is important to connect with people’s emotions if they’re going to remember a message. The audience also received medical information to help them understand what a stroke is, and how it affects the body. The stroke unit team at the time, 20 nurses and 2 neurologists, organised and ran these roadshows in their free time, sometimes even using their holiday to be able to attend. They provided blood pressure checks and blood sugar checks (high blood pressure and diabetes are major risk factors for stroke). The roadshow was delivered more than 10 times, and was seen by 2600 people in Flanders. The message was simple – Stroke is an emergency. If you think someone is having a stroke, you must act immediately – don’t delay.

Please read next:  What's in a name? A call to reframe non-communicable diseases

The generous investment from the stroke unit team brought results. In 2007, before “Geraakt!”, the AZ Sint Blasius stroke unit provided thrombolysis to only 6.5% of stroke patients – that is medication to quickly dissolve the clot causing a stroke. If a patient arrives at hospital less than 3 hours after they first experience symptoms of a stroke, they may be candidates for thrombolysis, which can improve survival rates, and reduce the disability caused by a stroke. In 2008, this rate dropped to only 4.5%. Many of the patients were simply arriving too late. But following “Geraakt!”, in 2009, 9.7% of patients received thrombolysis, and in 2010, this climbed to 16%. Piet admits, not everyone who went to the roadshow will remember the message, but he acknowledges, “There are 1 or 2 or 3 people who will save someone’s life with that information. That I am sure about. Because with “Geraakt!”, we saw a lot of people, and afterwards on a regular basis someone was saying, ‘Hey I saw your show and that’s why I recognised it,’ and that’s why they came faster. It’s not the greatest number – it’s not 20 people. But it always saves someone’s life.”
The enormous task of stroke prevention continues for the stroke unit team. Perhaps surprisingly, they have to reach out even to medical staff in their own hospital. If a patient has a stroke in hospital, they are not necessarily going to be treated as an emergency. So Piet’s team made a video, giving instructions, explaining the FAST test, and telling staff to call the number for neurology immediately.

“That was the most important thing,” explains Piet, “because people always called another doctor, an assistant, or something else, and he was in surgery, or he was doing something else, he wasn’t there, they were scared to call. So now we force them to call the neurologist right away.”

In addition, General Practitioners (family doctors) remain a constant target for prevention messages. “Almost every day,” says Piet, “I see people who are maltreated by their GPs here in Belgium. I still see GPs have said to the patient, ‘Oh, I will come this evening,’ or, ‘Oh, it’s nothing, I will give you some injection.’ They are not sent to the hospital, the GP didn’t recognise it, or they thought it was something minor.” And the public remains uninformed about the signs of a stroke, especially older people. “Sometimes you see things which are very bizarre – people who don’t speak for a few days. Or they say, ‘My arm is numb, I thought it was going to be OK, and now it’s worse.'” People wait, and if they survive, this means their options for treatment and rehabilitation are significantly reduced, and their recovery is much more limited.

Also ongoing is the stroke unit team’s research into the stroke survivors who leave their care, with the goal of preventing another stroke. “It’s a bit like a stroke coach,” Piet explains. “We follow the people at home to see what they do with their risk factors for stroke. We saw that most of the people who have a stroke, they have multiple risk factors… it’s about an average of 3 risk factors per person, and we saw that when you gave them too much information about changing their lifestyle, they will never do that. You have more success when you try to focus on just one risk factor, you have more chance to have a change of lifestyle, and that’s what we’re trying now. We’re following them at home, and we call them at week 1, 3, 6 and after 3 months, 6 months and after a year.”

The work of this dedicated team in Dendermonde has produced improvements for stroke patients in Dendermonde, and the learning has been shared at conferences where Piet and his colleagues make presentations. The intention is that lessons will be shared, methods analysed and practices which are proven to be successful are taken up elsewhere. Surely every patient has a right to expect the attention to detail that is championed by Piet and his team. Improvements in stroke care and stroke prevention are worthy ambitions.